At 40, Michael’s appetite for risk had lessened as his time horizon was shortened substantially. Because of this, he was looking at many options that were likely to produce lower returns than he might have hoped to earn. Narrowing down his options, Michael found himself considering two: a more traditional savings vehicle and Leveraged Planning.

Assuming he would earn a conservative rate of return in his retirement years, Michael expected he would need to have a “nest egg” of $2,959,728 by age 65.

Looking at the traditional savings product, Michael assumed an annual return rate of 3% net (after fees and expenses) – at this rate, Michael would have to save $78,815 after tax dollars each year in order to fully fund his future income expectations. Looking at it on a pre-tax basis, this meant that Michael would have to allocate $131,358 every year for the next 25 years to meet his goal.

Over the coming 25 years, this meant Michael would be putting away $3,283,942 pre-tax dollars in order to meet his future income goals if he used the traditional product.

The problem for Michael was clear: starting with nothing and using a traditional product offering meant that his money would have to work very hard to get him where he needed to be. 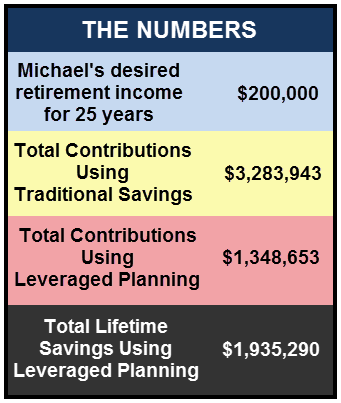 Using the Leveraged Planning solution, Michael’s firm would take out a simple interest-only commercial loan – one for which he was not personally liable. The firm, in turn, would service the loan with monthly payments of $4,495 for an annual total of $53,946. This meant that the total allocation over the subsequent 25 years was only $1,348,653. Comparing the two options for funding his retirement income needs, the differences were very clear and compelling.

Michael’s plan was designed in such a way that he could pay back the loan and earning enough to fully fund his future income needs from his insurance product. Michael still ends up paying far less over the next 25 years than he would have if he went with the traditional savings option he was considering. 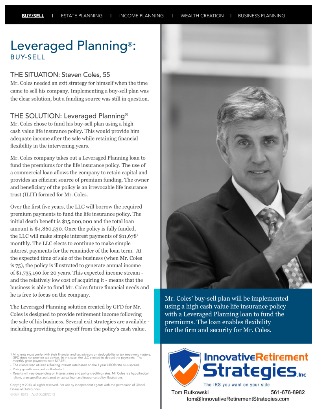 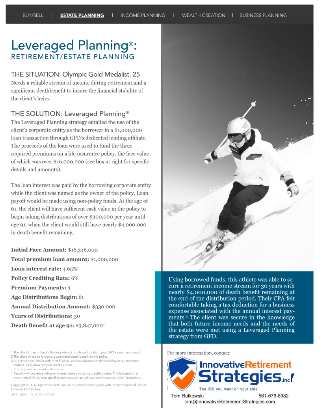 Questions? Click the button to schedule a time for us to call you.